Return to Kipling- 'The Trade ' 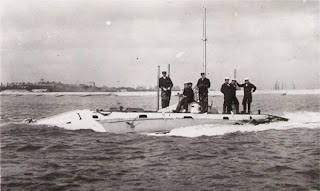 The ships destroy us above
And ensnare us beneath.
We arise, we lie down, and we move
In the belly of Death.
The ships have a thousand eyes
To mark where we come . . .
But the mirth of a seaport dies
When our blow gets home.......


On the 1st May 2015 I visited the Royal Naval Submarine Museum at Gosport with my pal Chris Percival. The Museum's publicity mentioned the submarine poem 'The Trade by Rudyard Kipling from 'Sea Warfare' (1916) : A combination of prose commentary and poetry. Worth being reminded of Kipling's role in 'Great
War at Sea Poetry, whose work of this genre included 'The Verdicts', 'My Boy Jack', 'Minesweepers' and
also 'The Lowestoft Boat' which reads more like the lyrics of a folk ballad.

At the outset of the Great War, see poetry had been initially quite triumphalist. The poetry of Ronald Hopwood and 'Klaxon' can be cited immediately. The Sea was portrayed as being part of the Royal

Navy's dominion. In the words of Edward Hilton Young , writing on board HMS Iron Duke in 1914.

The Iron Duke to the Victory
As once with you, so now with me
The Prayers and hopes of England are,
That bear her fortunes on the sea
To some furious Trafalgar.....


At odds with this is the Romantic view evident in such poets as Byron and Swinburne's work in which the Sea is more likely to be portrayed as a chaotic unmanageable element. Taking Byron.

Childe Harold's Pilgrimage ( Canto IV stanza 179)
Roll on, thou deep and dark blue ocean-roll!
Then thousand fleets sweep over thee in vain;
Man marks the earth with ruin-his control
Stops with the shore;-upon the watery plain


The more triumphalist view was obviously needed to contribute to the war effort. The public seemed hungry for a definitive 'Trafalgar' type victory. The Royal Navy were enforcing a slow impact and less glamorous blockade of Germany.

But ruling the waves was not the same as being able to control what was happening beneath the surface : U Boats lurking beneath the waves were a particular menace to older battle cruisers and to merchant shipping .
' Tin Ships' shows poetry coming to terms with the brutality of modern sea warfare.

'Tin Fish', reminds one of Imagist poetry which was starting to appear just before the Great War;  direct, with no word wasted. The phrase 'In the belly of Death' seems to parody the 23rd Psalm 'In the Valley of Death'. A commentator from the Kipling Society suggests that this could be an allusion to Jonah in the Whale.

'The Trade' depicts the new class of submariners needed for the war under sea. Taking verse 2 : The reference to 'prize-courts' refers to the rules re prize money, where at times of war sailors could claim enemy ships and their cargo as bounty. In other words there was no chance of reward for their work.

Few prize-courts sit upon their claims.

They seldom tow their targets in.
They follow certain secret aims

Their feats, their fortunes and their fames

Are hidden from their nearest kin;
No eager public backs or blames,

No journal prints the yarn they spin

The Submariner wouldn't even have a uniform as such . Men wore old sweaters. They were outside tradition and the public imagination.

Kipling's poetry related to the Great War at Sea is fascinating because he moves beyond triumphalism or viewing the sea as a chaotic element and takes a different approach. There is a quite a brutal new realism emerging. Kipling's view of the war at sea involves submarines,mines, mine sweepers, small boats pressed to join the war effort -'The Fringes of the Fleet'. 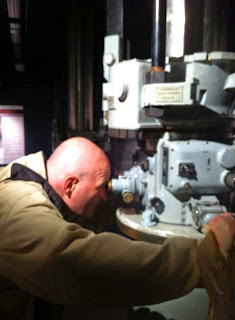 The writer of this blog- Photo -Chris Percival