Remembering the Fishermen who served during the Great War 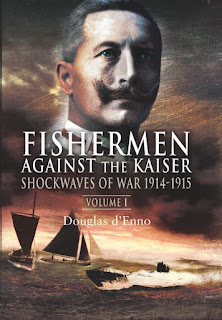 The writer includes extracts from lesser known poetry at the start of each chapter; Contemporary work from 'Punch', Alice Brooks,  Geoffrey Dreamer, along with  World War 2 poet Michael Thwaite. Dreamer's work has been covered elsewhere on this blog ; however was previously  unaware of Joseph Powell's poem 'Night at Ruhleben' .  Ruhleben was a German camp housing  a large number of interned British citizens and captured British sailors. Joseph Powell was elected as camp captain.


It's also helpful to be reminded of the work of naval historians from the 1920's who are overlooked now such as E.Keble-Chatterton and Lowell Thomas. From reading 'Fishermen Against the Kaiser' , got to learn about 1918 work titled ' Fishermen in War Time'  by Walter Wood.
Now available on line
Fishermen in war time -text

As a tribute to the fishermen who served during the Great War ,felt appropriate to post an extract from a poem by one 'H. Ingamells' titled 'The Minesweepers ' which first appeared in an anthology 'These were the men poems of the war 1914- 1918 ' (from 1919), also cited by Douglas d'Enno .

Starts on page 81 Text-These were the men