Last Post of 2016
Thank you to the large number of readers from many countries who have logged into the view this blog.  Please also consider looking at the associated blog Worldwar2poetry.blogspot.co.uk
The latest post concerns Siegfried Sassoon's influence on World War 2 poets.


Vernon Watkins ( 1906- 1967), sometimes referred to as the 'other Welsh poet' due to his close association with Dylan Thomas. Thomas was due to be Vernon Watkins' best man, but missed the wedding ceremony .Vernon Watkins  did a great service to sea poetry generally by translating the  poetry  of Heinrich Heine (1797- 1856) from  German, appearing in the collection  'The North Sea ' (1955).

Watkins served in the RAF from 1941- 1945, including a spell with RAF Intelligence, and was stationed at Bletchley Park. 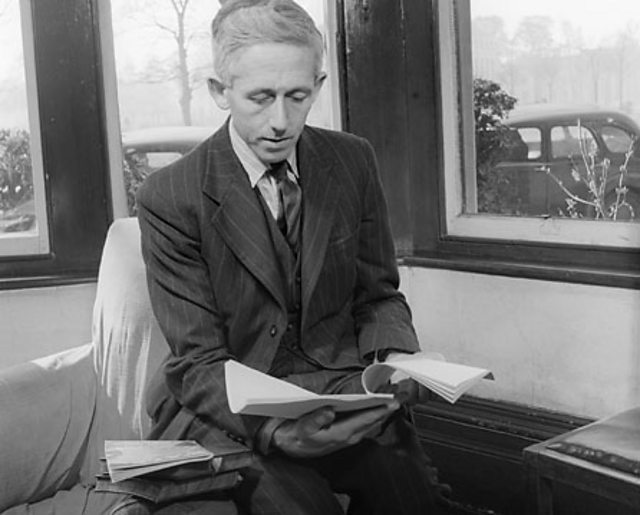 'Griefs of the Sea' was most probably written around 1940. The poem appeared in 'More Poems from the Forces- A Collection of Verses By Serving Members Of The Navy, Army and Air Force' edited by Welsh poet Keidrych Rhys in 1943, and dedicated to the USSR.

'Griefs of the Sea'- Vernon Watkins

Is it fitting to mourn dead sailors,
To crown the sea with some wild wreaths of foam
On some steep promontory, some corner cliff of Wales
Though the dead wave hear nothing.

It is fitting to fling off clothing,
To enter the sea with plunge of seawreaths white
Broken by limbs that love the waters, fear the stars,
Though the blind wave grope forward to the sand
With a greedy silvered hand.

It is a horrible sound, low wind's whistle
Across the seaweeds on the beach at night.
From stone to stone through hissing caves it passes
Up the curved cliff and shakes the prickly thistle
And spreads its hatred through the grasses.


The view of the sea, as a potentially hostile element, indifferent to the fate of humanity, is clearly evoked here. The sea 'no longer cares' about the drowned. The 'dead wave hear nothing' , there's also an image of a 'blind wave. There's also a mention of a 'sea-god' who isn't named, like some force one can not  intercede with. Interesting how the wind is portrayed in the same bleak fashion. 'We were quarrelling with a phantom unawares', suggest Nature generally is not interested in negotiating with us.

' Autumn by the Sea'-Janet Hills

The Autumn's ashes here.
No warmth of berries, and the sunlight grieves
With no woods near.
The unescapable, the desolate sea,
Rigid through all its changes, deadens me,
And pale as Autumn seas, the scattered leaves
Break round the long-stalked flowers on homeless land

We loved to talk of peace,
And looked to see the rising of a truth
If war should cease.
Now, in the darkness, listlessly we guess
Towards some future blood-drained weariness.
For we , cut off from grace, must spend our youth
For something we abhor, but know must be.

Janet Hill is listed as an English graduate from Sommerville, then joined the WRVS, then became  an officer in Intelligence. One collection of her work, titled 'Fragments', was published in 1956. So far haven't located any more of her work in World War 2 poetry anthologies, apart from one further poem in 'Shadows of War'. Particularly like the reference to the 'desolate sea/ Rigid through all its changes deadens me'. The sea is not portrayed as being hostile to the poet, but 'unescapable' (sic) , like the fact that the poet's generation is committed to fight an inevitable war. This sense of fatalism is typical of World War 2 poetry from Britain. Poetry is neither a tool for recruitment nor trying to enlighten non-combatants about the 'true' nature of war.