And in Denmark there is a Jutland Memorial Park

And a Sea War Museum about Jutland, with some English and German language pages to be added soon 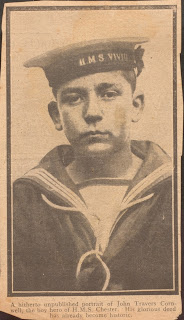 Picture of Jack Travers  Conrnwell courtesy of the National Museum of the Royal Navy, Portsmouth

At the time of writing the National Museum of the Royal Navy, Portsmouth have announced a large centenary exhibition to commemorate the battle of Jutland.

Hopefully one exhibit will the restored sketch of Jack Travers Cornwell (posthumous) VC: The original drawing was made by Frank O. Salisbury.
(And) "is a 271 x 151.5 cm large preparatory charcoal and pastel sketch which is in a very poor and fragile state and in need of serious conservation.
An appeal has been launched at

There is only a further fourteen days left to fund the Appeal.

One of the intriguing facets of Great War at Sea Poetry Project is the occasional elevation  of sailors to the status of  demi-gods .

Most noticeably in Kipling's 'The Verdicts', the verse first introduces then negates the idea. Heroes aren't made in the heat of  battle.

But as the last two verses proclaim.....

Our children shall measure their worth.
We are content to be blind
But we know that we walk on a new-born earth
With the saviours of mankind.

So heroes are made by the praise of future generations, rather than the 'blind' of the present.

Interesting to note that Kipling implied that the earth was 'new-born' after Jutland. It's hard to think of a sea battle that was so anticipated by so many people.

Elements of the British public wanted a new 'Trafalgar' , the naval lobby of imperial Germany wanted to test their  new fleet in real battle, and crush the British blockade. On 31st May/1st June 1916 the greatest sea battle ever known was fought. It wasn't decisive....British casualties were higher : 6094 men dead with 133,000 tons of shipping sunk compared to the Germans 2551 men dead and 62,300 tons lost.

The numbers of casualties was hardly high by World War 1 battle standards but the long term domination of the North Sea surface by Britain remained. This drove the Germans back to increasing U boat activity which had been partially restricted in 1915.

Amongst the Jutland British dead was the aforementioned Boy First Class John (Jack)  Travers Cornwell of HMS Chester who in Admiral Beatty's words:

Mortally wounded early in the action, he nevertheless remained standing alone at a most exposed post quietly awaiting orders with the gun crew dead and wounded all round him.His age was under 16 1/2  years. I regret that he has since died, but I recommend his case for special recommendation to his memory and as an acknowledgement of the high example set by him.
(source 'The Battle of Jutland' Geoffrey Bennett, 1964).

A posthumous VC was awarded. Interesting to hear the citation of the 'high example' . A massive amount of the Royal Navy's work during the Great War involved patrolling and blockading. Many of the public wanted active heroism. One response in poetry was the elevation of those who fought.

This is in contrast to modern day historians who have cited the higher British casualty rate and loss of shipping : A prime example can be found in Ben Wilson's 'Empire of the Deep-The Rise and Fall of the British Navy' (2013) , with the author concluding that
"Raw figures are no basis to claim a victory,however.  Both sides managed to lose the Battle of Jutland..."

A Souvenir programme for Jutland, as if it was a show, was published a few weeks after the battle. Consisting of some 36 pages, there was analysis of the battle, commemoration of the British War dead,a history of the Kaiser's navy. Also adverts for various products such as 'Swan Pyjamas', 'Liberty Soap' and cigarettes which featured a set of cards commemorating women's war work. There was one poem, 'To Beatty's Boys' written by one 'Arthur Waghorne'.

At the time of writing I have not managed to establish who Arthur Waghorne was.

Full text of 'Souvenirs of the  Great Naval Battle and the Roll of Honour' . (Thanks to Tim Lewin for his assistance.)

Posted by Michael Bully at 09:52 No comments: