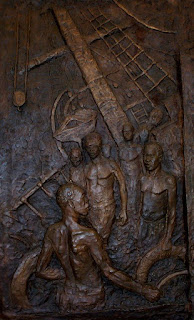 Above image is the memorial to SS Mendi at Delville Wood

The Great War at Sea Poetry Website has a new page about the sinking of the troopship SS Mendi on the 21st February 1917.


Some events for the centenary of the Battle of Jutland.

Royal Navy to mark Jutland anniversary with parade and ceremony at Southsea17/03/2016The Royal Navy will be marking the 100th anniversary of The Battle of Jutland with a parade and ceremony at Southsea.More than 100 sailors will march through the town – led by the Royal Marines Band Collingwood – to Southsea Common war memorial where a 45-minute ceremony and service will take place on May 31.About 50 veterans from the Royal British Legion and Royal Naval Association will also join the parade.Members of the public are being encouraged to line the route from Palmerston Road, along Avenue De Caen and the Esplanade."
Jutland Parade-link


The maritime charity 'Seafarers UK'  are organising a fundraising  concert at The Barbican, London , 15th June 2016, "To commemorate the Centenary of the Battle of Jutland and the lives of all those who died at sea during the Great War"
Vaughn Williams First Symphony will be performed by the London Concert  Choir , singers include Katherine Broderick and Roderick Williams.
Jutland Concert-link


The Royal Naval Museum at the Portsmouth Historic Dockyard open the exhibition '36 Hours: Jutland 1916, The Battle that won the war'  on 12th May 2016. Described as a 'blockbuster' : Stating

Through never-before-seen displays and immersive  (sic) galleries the exhibition will challenge the belief that the Battle of Jutland was a German victory. The National Museum of the Royal Navy will present the battle as a British victory, both tactically and strategically.
Exhibition: 36 hours -link


After the Jutland Centenary the Great War at Sea Poetry blog and website will both start to feature general war at sea poetry from any conflict that is deemed to be of interest.

Have recently started looking at an anthology titled 'More Poems from the Forces- A Collection of Verses By serving members of the Navy, Army, and Air Force' edited by Keidrich Rhys ( George Routledge & Sons Ltd., London, 1943- "This Volume is dedicated to the U.S.S.R." )

Some excellent poetry therein, such as 'The Green Navies' by one John Prichard, described as 'Leading Writer, R.N. '

"O Christ! to think of the green navies and the green-
skulled crews" -Herman Melville


By Capricorn seas and typhoon
Or Stove hatch death sands their eyes
With a quick salt end,
A watch below in their sea-bed schools.
Only Mother Carey's chickens
See them go; squawk and scavenge

Davey Jones's crews: in two tides
A squid has their blood and magpie
Fish have cached their jewel eyes;
A crab hermits in the empty skull
And big-sea brooms polish their ribs.

Their souls inhabit rats; their flesh
Fell in a hundred ports; speech
Was broadcast in lost winds.
Only a seaman moonraking over
The wall, pipes the green navies;
Can see a coral cross of bones. "

Posted by Michael Bully at 08:37 No comments: